Every day around the world thousands of people get together to enjoy paintball, and they have excellent reasons for doing it. Paintball is fun at almost any age, and you no longer need to fear the hard-hitting paintball tag. Young children may enjoy paintball now without their parents worrying about the impact of a paintball. Low impact paintballs are a thing now.

We can think of several reasons you should try paintball if you haven’t already. 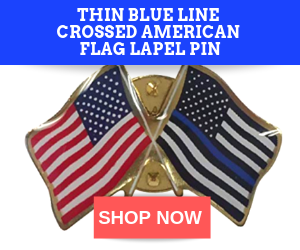 Did we mention it’s a ton of fun? The fun aside, you’ll actually learn some handy life skills or improve your current versions of these skills. Paintball is a teaching experience for people of any age. Kids learn about teamwork, strategy, sportsmanship, and communication while playing paintball. You’ll need all of those skills to be good at paintball, and you'll want to be proficient after you play a few times.

Now for the bad news, paintball isn't cheap like a game of darts. That said, it is less expensive than golf, baseball, football, and soccer, so the expense is really just like any other sport you or your kids want to play. Paintball is often better than other sports, except maybe golf, because you can play with your kids and turn it into a family event.

To make your life a little easier, we’re reviewing Spyder, one of the best companies out there that sell paintball gear. Weak guns and poor gear choices often ruin all the fun that comes with paintball. If you've played before and rented equipment, you've probably dealt with underperforming gear, and it stained your memories of the game.

We look at several things when we review a company or a product. The idea that carries the most weight with us is public opinion, and it should be important to you as well. How people that use the gear feel about it is all the information you need to make an informed decision. Our reviews begin with us looking at what the company offers, what people think about it, and what it costs.

What Is Spyder Paintball and Why Is It Unique?

One thing that helps Spyder stand out in the crowd is the length of time they’ve been in business. Since 1992, Spyder has made high-quality paintball markers and gear with no hint of stopping anytime soon. However, being in business a long time doesn’t mean you make great products. There’s much more to this company than years of experience, like excellent customer support.

Customer support is crucial to happy customers and public opinion, and in the paintball world, reputation is important. If paintballers don’t like your gear or it fails to perform well, they won’t give you a second chance most of the time. So, companies that make paintball markers and equipment tend to get held to a higher standard than other companies. Nobody enjoys a weapon that fails in the field.

Honestly, and we may get some strange looks for saying this, but simplicity may end up being the best thing about Spyder paintball markers. They use classic models and designs proven to work well and not fail after heavy use. If you want crazy colors and weird looking paintball markers, you’ll need to modify and paint it after you buy one.

Spyder works hard to improve with each new model by listening to what paintballers say about their products and how they perform. You can wear out a paintball marker, but it’ll take a long time to wear one of those made by Spyder out. On a side note, if you don’t take care of your paintball gear, no amount of quality will prevent failure eventually.

We read a lot of reviews and consulted to wisest of the paintballers we could find to check out how well these markers perform. We didn’t find complaints about common paintball problems like paintballs rolling out of the gun before firing or failure to re-rack a paintball after shooting. Surprisingly, we didn’t see many complaints about CO2 tanks freezing up either, and this is a common issue with all paintball markers. Rapid firing the marker releases CO2 too fast, and the tanks often freeze, just slow down.

To recap, customer service and great products that work as advertised make Spyder a beacon in an industry littered by cheap gear and underperforming paintball markers. That’s not to say quality gear isn’t out there, but don’t buy paintball gear at a department store or from an ad that pops up online after you search for paintball gear. You'll be disappointed, and we want you to enjoy the sport. 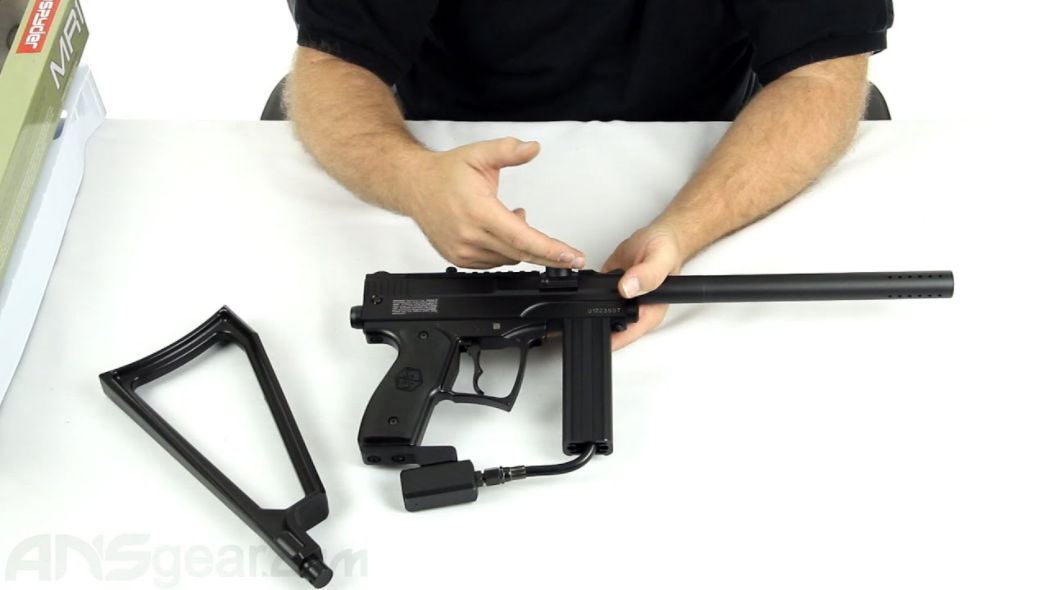 We can spout the good things about being in business for decades and how much their customers love them all day long, but the real plus side to Spyder is their vast assortment of paintball markers. They won't cost a month's pay, and you know they'll perform well if you take care of them. Here's the short list of our favorite paintball markers from Spyder:

Admittedly, this paintball marker is a favorite because it looks a bit more realistic than most markers. This is more of a fun time marker because it doesn’t hold many paintballs. It uses a nine-round magazine instead of a hopper feeder to keep the paintballs which limits how much ammo you end up shooting before finding cover to reload. However, an aftermarket hopper is available if you want one.

If you want to get a hopper for it, expect to pay between $40 and $60 extra to purchase a decent hopper. It loses some of its realism with the hopper attached, but the hopper holds more paintballs which means more fun before reloading.

We’re not picking a favorite paintball marker, but this is unofficially our favorite. The valve system used in this marker allows for over 1,000 shots on a single 20-ounce CO2 tank. Some user reported getting close to 1,300 shots at full velocity because the tank emptied. Part of the fun in paintball is shooting the paintballs, so more shots before downtime equal more fun.

Again, these are quality paintball markers at very reasonable prices compared to guns of similar design. The only problem we found is you really need to spend an extra sixty or so dollars and get a hopper and refillable CO2 tank to go with this gun. You don’t necessarily need them, but they’ll increase your fun level. 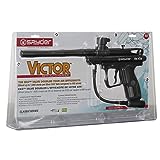 Like the Spyder MR100 Pro, this marker uses the same valve system but doesn’t come with a stock. It’s great for beginners or kids that want to try out paintball but don’t have a big budget. It’s easy to control and accurate, so you’ll hit your target most of the time. Accuracy is critical for new players and kids because missing too often messes up some of the fun.

If you’re a beginner or getting this for kids in which case you’re not sure you or the kids might enjoy paintball, opt for the cheaper hopper and cheaper paintballs to save money. Avoid paintballs that don't have a brand name you recognize, so you don't end up shooting hardened paintballs and hurting someone.

One thing about Spyder, they offer paintball markers for every skill level and most budgets. Even if you go for their higher tier models like the Spyder Fenix Electronic Paintball Marker, the price rarely gets over $250 including accessories and bonus paintballs. The Spider Fenix marker with no extras is $149.95 on Amazon and includes some electronic bonus features and dual ball detents to prevent rollouts.

Compared to similar markers manufactured or sold by companies like Tippmann and Empire, reach prices in excess of $300 for the marker and no accessories. Sadly, many of the pricier paintball markers need special hoppers or off-size paintballs as well. With Spyder, everything is pretty standard and interchangeable from the CO2 canister to the hopper.

What Do Paintballers Think About Their Paintball Markers?

Most people that own a Spyder paintball marker have nothing but good things to say about them. The markers perform as advertised and don’t fail under heavy use or if you get them a little dirty while paintballing. You’ll get well over 1,000 shots from most of these markers with many users reporting over 1,400 shots on a single 20-ounce CO2 canister.

We didn’t find complaints that we see with some paintball markers, so it's safe to assume these problems don't exist in Spyder gear. Common issues with affordable paintball markers include things like the ball rolling out of the barrel and poor accuracy. We didn’t see any complaints about accuracy and most Spyder gear uses double detents to prevent paintballs from escaping before they’re fired.

Does Anyone Make Better Paintball Gear?

As we mentioned in the pricing section, most of Spyder’s competitors offer the same gear but at higher prices. That said, there is always something better out there, but you’ll end up paying a lot more and, frankly, a high-quality marker at an affordable price means more fun for you. You’ll spend less time worrying about ruining your $400 marker and more fun shooting and diving for cover.

Our Opinion of Spyder Paintball

Our opinion of Spyder paintball gear is pretty high. We like affordable prices because it allows us to spend more money on accessories. Everyone loves accessories. Keep in mind, if you play with friends outside of paintball arenas and venues, you still need to buy protective gear. Purchasing a cheaper marker leaves more money for protective equipment that cushions the blow and protects you from bruises.

We like affordable, but we never want to sacrifice quality just to save a few dollars. Paintball is great for exercise, socializing, and relaxation. Really, you'll find it oddly relaxing because your mind focuses on paintball instead of your everyday worries. So, spending a lot of money may add to your woes. With Spyder, you get affordable quality which to us is the perfect blend for paintball gear. 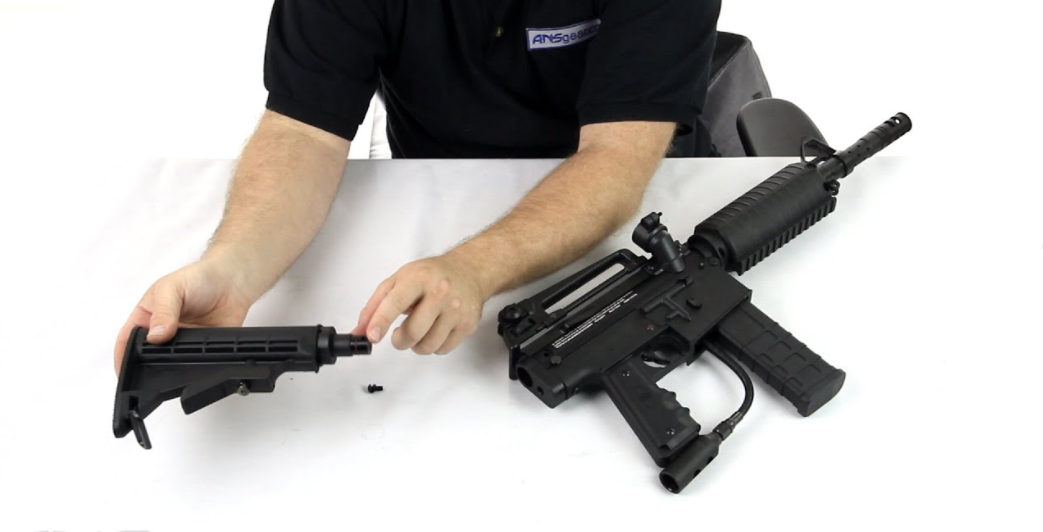 We’re not implying Spyder paintball gear is only for beginners. Their markers come to you at beginner prices and pro quality. Honestly, if you’re starting out in paintball, you probably want to save money in case you decide the sport isn’t for you or your kids. You won't, but it never hurts to play it safe, so starting with Spyder gear is an affordable option for beginners or pros.