What is good beginner paintball gun?

Well, that is a question we hear again and again so we created beginner’s guide to outline the characteristics to look for in your first paintball gun.

Easy maintenance is an important factor for folks just starting to play. Since a beginner is just staring to learn about paintball, they will not necessarily know all of the maintenance procedures and mechanics of complicated machines or how to properly care for them.

A gun that is easy to maintain and easy to disassemble is a much better teaching tool than a complicated gun that is hard to take apart.

A simple gun that has a lot of options for customization will teach the beginner the basics of upgrading heir rig and prepare them for a more advanced gun, as opposed to starting with an advanced gun and becoming frustrated and overwhelmed.

What a player needs as they are beginning to play is a run that shoots reliably. A new player can not afford to get stuck in the field, forced to clean or perform maintenance of a finicky gun.

Practice makes perfect and a new player will need to practice a lot to advance their skill. With practice comes wear and tear to the gun.

The new player needs to be comfortable trying out maneuvers and moves without having to worry about breaking or damaging the gun. Just like you won’t use a luxury car to teach driver’s ED, you won’t use a high end gun to train a new player.

This is not to say that a new player should be encouraged to abuse the gun, of course not. They should learn to respect the gun, but the nature of learning is making mistakes, so consider that when choosing the best paintball gun for beginners.

Getting tired or fatiguing the hand and arm can be discouraging. Using a heavier gun takes practice and muscle training.

It is better to learn the sport first before attempting a heavier gun.

If you are a beginner you will quickly realize that People who play paintball (sometimes called “ballers”) Speak their own language. Here are some of the terms used.

Some are technical terms related to the marker. Some you probably already know, but it case you missed a few…

Walking the trigger is a form of art practiced by ballers to rapidly fire their gun. It involves alternating your index and middle finger to pull the trigger rapidly in succession.

Walking the trigger is helpful when only Semi-automatic play is allowed.

ASA stands for Air Source Adapter. An ASA on a gun is at the threaded port on the gun where you screw in the air (or Co2) tank.

This adaptor opens the valve of your tank and allows your marker to be pressurized. Because your marker is pressurized, it is now challenging to remove without damaging the o-ring seal between the gun and the tank.

An ASA lever On/Off switch allows you to turn the tank off, which basically closes the tank valve so pressurized air can no longer enter the marker.

Now, there will still be pressure in the gun, even with the valve closed, so you must de-pressurize the marker by dry fire (firing without paintballs) or using a bleed valve etc.

Once the valve is closed, and the marker is depressurized, you can remove the air tank. This is basic knowledge every paintball marker must know to maintain and use a marker. If the gun does NOT have an ASA switch the removal process is more complicated and involves dry firing the gun while twisting the tank.

Always have your mask on, empty the gun and point the gun away from people while removing the tank.

Magazines. There are guns out there that are use magazines, somewhat similar to real guns.

The reason someone chooses a mag fed gun has to do with play style, challenge, preference, making a scenario more ‘real’, playing a part, that kind of thing. People do not use mags because they perform better, or faster, they use it for the intangible benefit they get, for the experience.

Porting is the holes on the side of the barrel. The porting holes can be in a straight line, swirl around the barrel in a spiral pattern, or possible have a different pattern.

The porting allows pressurized air to escape out of the barrel while the paintball is propelled down the shaft. Porting also serves to make the gun quieter, and stealthier.

A long barrel with ample porting will be the quieter then a short barrel with minimal porting, provided the marker is the same.

The regulator works by shutting off air supply when the pressure in the gun is at the correct level, and opening it when the marker needs more pressure. When the regulator opens to increase the air pressure that is called ‘recharging’ btw.

In this case boring, is not dull or uninteresting. Boring as a paintball term refers to the size of the INTERNAL diameter of the barrel.

This diameter is commonly .689” to .690” from the manufacturer. A bore that is too tight will tend to break balls, and too lose won’t put enough power behind the ball because air sneaks past the ball.

An ideal bore size is determined by taking your preferred paintball and placing it in the barrel. Blow on one end, if the ball has a small amount of resistance before propelling out the other end the bore is a good size.

If you get blue in the face trying to blow out the ball, even if it eventually comes out, its too tight.

This is the tube that takes gas from the tank/ASA to he gun’s regulator or other location in the gun.

When the barrel rises up slightly in response to being fired. It is a similar to the ‘kick’ or ‘recoil’ concept.

What are infrared eyes and how do they ‘reduce chop”?

“Chop” occurs when a ball is partially loaded as a gun is fired and the ball gets chopped inside the chamber.

There are a few systems a gum may have to prevent the chop from taking place. One of those system is called infrared eyes. Infrared eyes, check to make sure the ball is probably loaded before allowing the shot to complete, thereby reducing chop. 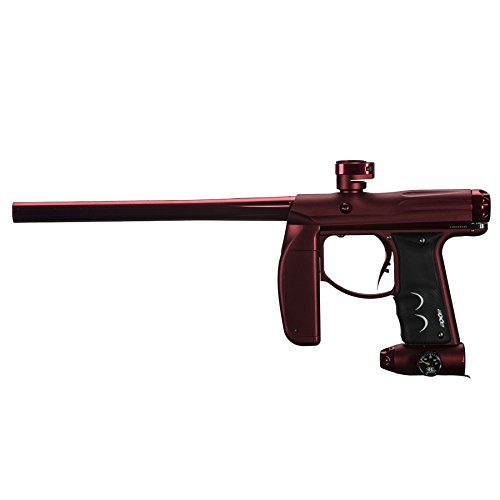 The trigger runs on a micro switch as opposed to magnets. Very lightweight gun. 2 lb, 4 oz with barrel and battery. Includes all tournament settings.

A great bargain on a fully loaded tournament gun that is easy to maintain and operate. Fans of this gun continually say this is the best paintball gun for beginners.

Easy maintenance features include a self lubricating delrin drive with only 4 o-rings, no O-ring on the regulator, a wireless frame, and a completely serviceable solenoid. Spool valve electro marker.

Mid-end budget with high end quality and features. One of the most high quality, feature packed and best beginner paintball guns.

8.5” barrel, Aluminum gun with durable black painting. This is a common rental gun due to durability. Easy to maintain, easy on air and very customizable.

Easy to disassemble, can take off one half of the gun to perform maintenance and customize. Easy to remove feed neck located above the forward grip.

The front sight acts as a button to remove the feed neck. The air tube uses a compression fitting making it easy to remove and replace. 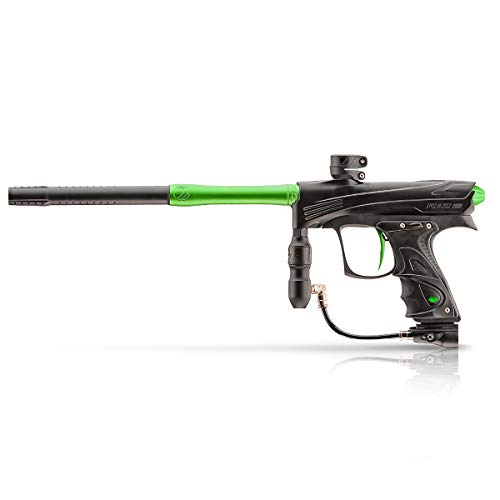 The Dye Proto Rize MaXXed Paintball Marker is a step up from the ‘rail’ model. The Rize has a two piece barrel 14”, an on/off ASA. This model has a hyper 3 regulator.

The feed neck has a special UL ‘rotate to tighten’ clamp. This model has an adjustable trigger. The solenoid has been upgraded since the rail.

The bolt also has more volume and pressure then the rail. Bolt is easy to remove and o-rings are color coded for easy maintenance. Spool valve electro gun.

Best in class for this budget, a lot of gun for a small investment. 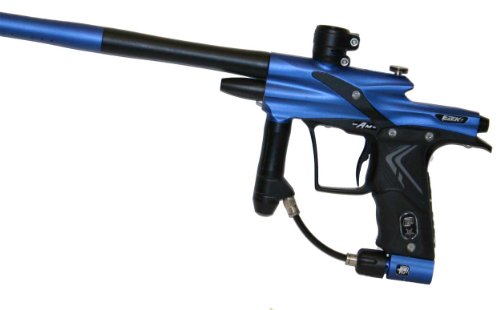 The ETEK4 has a high quality regulator, ASA on/off switch, the ZICK 2 rammer kit is included. The LY has glass reinforced nylon which is very durable.

The feed neck is off center slightly, causing the ball so come in from the side and prevents the ball from bouncing once it loads, which prevents ball chopping. SLS regulator, not customizable. Poppet valve electro gun.

A very high quality for the budget

This concludes our recommendations for the best paintball guns for a beginner.

We hope you find one that works for you.